Y es, I am finally doing it! I have been saying it for a long time, and in less than a week I will be pulling the plug. I actually feel quite excited!

Of course you maybe thinking I’ve lost the plot a bit; suffering from some kind of crisis, or engaging in an attention seeking exercise. Social media by it’s very nature is about getting attention, each time you post or comment, from those you know and those you don’t. So, it’s a fair thought. I can assure you though, its more a break-through than attention seeking or a crisis break-down. I am giving up an unhealthy element in my life. 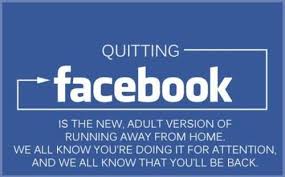 I could just blame the continuing issues with Facebook’s security; their apps listening into our conversations; them engaging in social mood altering experiments and infinitum data collection on me; Cambridge Analytica, and how it operates in general; all of which has indeed left me feeling somewhat mistrustful. Realising I do have a choice whether to continue using this service or not, deciding it’s just not a price worth paying.

More so though, is the addictive waste of time I have increasingly spent
with a good dosing of negativity thrown in daily. Humans are social by nature; certainly when Facebook arrived at our internet shore, It was a breath of fresh air.

From all parts of the world, we could now make new friends without the actual meeting part. Pen pals in real time! It was great! It was uplifting and positive but still just a place, now and again that you would visit.

Certainly I was a big fan of the idea! Learning new things, from people in other parts of the World; sharing information, catching up on lost friendships etc. However, Facebook has woven it’s way into my daily life more than I care for, that is, it is my life literally, displayed for all those who I allow in, and even those I don’t.

I know I am not the only one. It’s become the norm for most, that when we meet someone new now, we often add them as a Facebook friend rather than just exchanging phone numbers. Ta da! An instant window into other peoples lives.

My dilemma as a single person, living alone, with no-one to greet the day with a conversation is connection with others. Upon waking I would start the day with a dose of Facebook, and top up through out the day. Possibly interacting, but mostly wasting time I could use else where,  scrolling down the newsfeed, checking to see what Facebook chose for me to see.

Its not just about connection any more because when you get to that stage, you have to admit to becoming an addict of other peoples lives, their views and how it influences you on a daily basis. Its subtle but you soon realise that life has passed by, you are left anxious and a desire to be more competitive (even if you don’t compete) with others illusionary lives.

Over the past few years I have become increasingly saddened by the newsfeed content on Facebook; seeing less of my friends posts, and more often than not, ever raging conflicts, miscommunications and negative influences in the World at large. It’s depressing!

Yes, you can modify your settings, un-follow, de-like etc.; have you noticed when you do that – if a friend had similar interests, posts appear like an advert?

At one point I was battling with Facebook; un-following people, pages, groups, de-liking, to the point Facebook wouldn’t share anything but a few posts on my newsfeed; and usually they were the incessant daily posters. The message upon scrolling to a new low, and less than a page – was “add more friends”!

It was then I questioned, “why am I doing this?”. If I am not part of the solution, then I am part of the problem.

What has held me back in quitting earlier is FOMO (fear of missing out). The loss and grief I anticipated I might experience from not being connected to my social network – “my friends”; but social is not what I would describe Facebook any more, it’s most definitely anti-social, becoming socially lazy as a result.

The truth is, those friends and family who actively engage with me on a regular basis, will continue to do so, and possibly more so. It has been admitted to me – if I have posted, or commented on a thread, there is no need to call to find out how I am, what I am doing, etc. Ergo, I must be doing the same!

Once my profile is gone, I suspect though it will be a case of out of sight out of mind for most of my facebook friends. Those who care but don’t engage regularly (apparently, from other blogs I have read); are more likely to ask how I am via some mutual friend on Facebook, instead of contacting me directly! That’s just how it’s become!

I expected resistance from my announcement. I made provisions to make sure I could be contacted and to give those the opportunity to give me their details. I wasn’t just disappearing off the face of the Earth. So far, that resistance has come in the form of limited acknowledgement of my post. Maybe they don’t follow me so haven’t seen it, in which case it won’t be much of a loss!

Of course it’s always a possibility Facebook has something to do with it; after all if everyone was to put up a big sign saying they are quitting, it might make others think of doing it too! 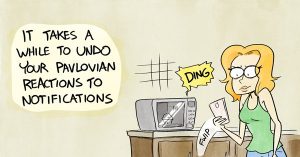 I dare say, I don’t have that much influence! People deactivate their profiles all the time for their own reasons. Most times they don’t say anything. Its only when you haven’t seen person X in a while that you look; sure enough they have deactivated their profile. Most return within a month or two. Will I do that? Possibly, I am not going to say never, but I am making it extremely difficult to do so.

It’s so easy just to deactivate and see how you feel without it. That’s why I have announced it. It has given me the impetus to stay true to my decision. With closing my pages/groups also, I would have to start a fresh. Those who have done similar have never returned. I hope for my own well-being, I am one of those.

Meanwhile, here’s to my new paradym, less anxiety and much more positivity in my Facebook free world!

….If you are thinking of doing the same and you found this encouraging then please feel free to leave a comment. 🙂