Suffer from endless nights staring at the ceiling, tossing and turning, frustrated, counting sheep, just trying to get to sleep? Overcome your sleepless nights with this high quality Audio CD.

Arms of Morpheus is specifically designed to help people who have problems sleeping such as insomnia and sleeplessness caused by stress and anxiety. It’s a modern day illness that affects everyone from time to time, for others it’s a continual curse.

Like many other audio CD’s of this nature; their claim is that without the need for drugs or herbal remedies, Arms of Morpheus will guide you into a comfortable sleep, night after night. By creating a condition for deep mental and physical relaxation; It will help you overcome stress and anxiety and cure sleeplessness and bad dreams, which in turn creates natural rejuvenating properties.

I myself generally don’t have a problem getting to sleep, in fact that is my problem a lot of the time, is that I get so tired.  I suffer with M.E. my sleep pattern is such that I have a rest in afternoons, and about 6 hours of sleep at night. Rarely do I sleep past 7 hours or more, and I do get to sleep relatively quickly. However there are always those odd occasions, where my brain is buzzing due to something on my mind. It was very serendipitous to have been sent this CD at this time.

It seems this very week that there was a lot going on with work and within my personal life that had created this very situation. I had gone to bed at 11 pm, after half an hour of not being able to get off to sleep, tossing and turning. I tried some Reiki that usually does it. Nope. Then I tried meditating but nothing was working so I got up. It was around 2 am by this time, and I decided okay brain, I will work you till you drop. I started to play Sudoku on Facebook. By 4 am I was sufficiently tired and slept for the normal amount of hours til around 10 am.

The next night no problem. The night after that, the buzzing started again and I just knew I was in for another night of a Sudoku games. Thich made things worse as I knew I had so much to deal with. As I lay there, I remembered that the CD had arrived. I fetched it and started playing it.

I laid back and instantly felt more relaxed by the background sounds. It was natural and very relaxing. Then a voice spoke which actually surprised me not because I didn’t expect it but because it was actually a firm voice. Normally relaxation CD’s have a voice that is floaty. I was compelled to listen further and do as it instructed. Within minutes though I was asleep, I have no idea after the first few moments what else was said!

The next morning I actually woke the same time, but I did feel a little different. I had a deeper sleep and was more charged than normal. Now, I am not one for purchasing audio CD’s for a particular purpose, but I do have to say that Arms of Morpheus stands up to it’s claim so far; for helping you go to sleep and feel better in the morning. As for long term sleepless nights, I cannot tell you, and I really don’t want to go there. If I do, I shall certainly play this CD again with confidence.

Saying this though, I might just try it out for a week even if I can get to sleep, to see if it has any affect on my general sleep pattern caused by the M.E. You never know, it may help! 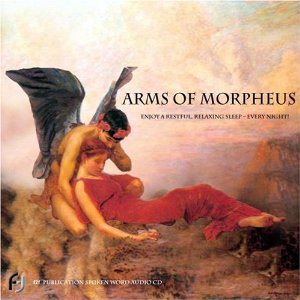